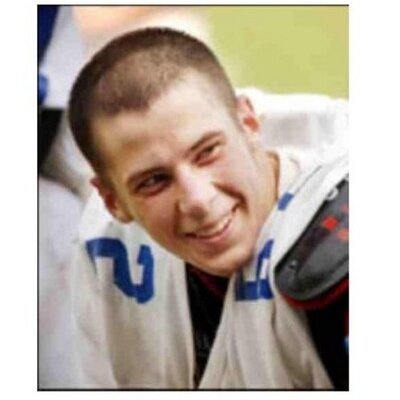 Matt Hobby was a Pope High School Student and Football player known for his passion and determination on and off the field.  Unfortunately, he would need this strong and courageous spirit to face the battle of his life when he was diagnosed with Ewing Sarcoma, an aggressive form of Childhood Cancer. With the encouragement of his teammates and the Pope High School community, Matt vowed to “STANDTOUGH” through many rigorous forms of treatment. Despite his courageous fight, Matt lost his battle with cancer on May 30, 2006 just a few days after his high school graduation. During his last days, Matt told his parents,

“I have lived 17 years and been able to do a lot of great things,
but the little kids with cancer need a chance to live.
Tell them to raise money for research.”

Why Give to Matt Hobby Rally Foundation?

During Matt’s 3 year battle, his family and friends became painfully aware that many forms of childhood cancer are not well researched. In fact, it had been years since Ewing Sarcoma had been considered for any meaningful research funding. Contrary to popular belief, the majority of cancer research funds focus predominantly on adult  cancers; namely, colon, breast and lung. Childhood cancers most commonly infect the blood, bone and brain. Due to this lack of funding, the treatments available to children are not specifically tailored to their needs and therefore cause extensive long-term damage. Three out of five children who survive cancer will develop chronic health problems such as heart disease, lung disease, hearing loss and even secondary cancers. There is still a lot of work to be done, and funding is all that’s lacking!

It all began right here at Pope!

Pope mom, Dean Crowe, was already in the process of starting Rally Foundation when she heard about Matt’s illness. Matt, his parents, and the Pope community partnered with Mrs. Crowe to launch the first 4Quarters4Research fundraising campaign here at Pope High School. During the four quarters of a home football game buckets passed through the stadium were filled with loose change that was then donated to help fund research for better treatments and a possible cure for Childhood Cancer. After hearing about Pope’s 4Quarters4Research campaign, 300+ schools in 10 states have held their own event funding hundreds of thousands of dollars in research.

Over the past 14 years, Pope High School has raised more than $282,239 to support Rally Foundation and honor Matt’s wishes.

Donate to the Rally Fund